Why Irish Music Remains a Mystery

Irish music, traditionally, was learned and played by ear. Often this is still the way of it. In years past, it was handed down from teacher to student, father to son or daughter, family to family, without written instruction, sheet music, or anything else but the music itself. It was listened to, experienced, and relished by those within earshot and people played their tunes the same way it was enjoyed by others. Unfortunately, when the Irish suffered intolerable pressure to stop playing their tunes and there was no one to listen to Irish instruments, the music was temporarily lost. 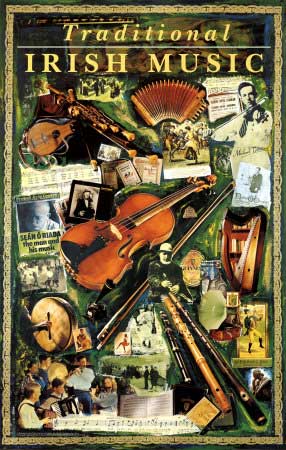 So why does Irish music remain a mystery? The same reason much of Irish history, stories, and culture was lost for hundreds of years.

. The British strangled it! They forced musicians to abandon their art in more ways than one.

When King George proclaimed himself king of Ireland, he banned everything Irish including Irish dress and hair styles. After his death, his daughter finished what he started.

Queen Elizabeth issued the decree, “Hang the harpers wherever found and burn their instruments.”

This certainly put a damper on the art of harping on the small island.

Years later, those few Irish men and women who had hidden their talents from the British either emigrated or sold their instruments during the famine of the 1840s.

Irish music only grew popular again in the last 150 or so years when the Gaelic Revival and those working to preserve Ireland’s history, made huge efforts to not only reclaim and promote Irish music, but to teach dance, history, literature, and culture to the people of Ireland. Ironically, many of those responsible for making Ireland Irish again, had English blood in their veins. These were Anglo Irish gentry who now considered themselves Irish. Many had come from families going back to the original Colonial planters given land from Queen Elizabeth. Some of these same people were involved in the Easter Rising of 1916, having gone one step further to reclaim their heritage in a new Republic separate from England.