Were the Irish Head Hunters? | Most Fun History Facts of Ireland
12810
post-template-default,single,single-post,postid-12810,single-format-standard,strata-core-1.0.5,strata-theme-ver-3.1,ajax_fade,page_not_loaded,wpb-js-composer js-comp-ver-6.0.3,vc_responsive

Were the Irish Head Hunters?

Were the Irish Head Hunters? Not exactly though they did think mystical powers resided in the head. When I first began reading Irish History in order to research my novel, ‘The Sun Palace’ which is set in sixth century Ireland, I was astonished to find that the Celts actually coveted and revered their enemies severed heads as well as those of people they admired, with one difference they did NOT go about looking for victims to decapitate. They only took heads from corpses.

The Celts  believed that the head was a vessel to all knowledge and power and the druids may have kept their heads clean shaven in order to gain access to the sun, ironically similar to the christian tonsure of  monks. (Monks who were often former druids) . The severed head held the spirit of the dead and could give those who possessed it, protection in this world, knowledge of the Otherworld, or  perhaps simply luck.

So what did they do with the heads once they acquired them? Peter Berresford Ellis in  his book ‘The Celts‘ gives several sources: Strabo, a geographer and philosopher around the time of the Roman Empire tells us that some embalmed the heads in cedar oil while others displayed them in temples and Dr. Simon James, an archeologist in London stated “by keeping the head of an enemy, they may have thought the spirit could be controlled.” They also nailed the heads above doorways or on top of posts driven into the earth.

Archeological and other Evidence An artifact showing the head as being revered is the Gundestrup Cauldron uncovered in Denmark and a large number of skulls from the Celtic period have been found in the Thames in London, but my most interesting discovery goes back to Hallstatt, Austria where some of the original Celts first resided. Even today in the chapel basement of St. Mikael’s church, is the ” Bone House.” Partially carved into bedrock and windowless, the only light comes from candles. Hundreds of skulls are lined up neatly on three walls and some intricately painted ones on a wooden shelf below a crucifix  The inhabitants of Hallstatt explain this as ancient Celtic tradition. 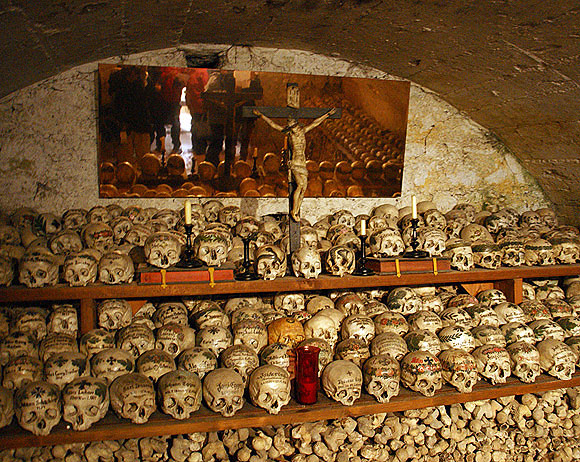 And the Irish?   In  research,  I often uncover evidence of Pagan undertones weaved magically through Christianity.  Clonfert Abbey in County Galway is an example. The sandstone arched doorway is carved with five severed heads

But where we Irish most find our historical evidence, is in our stories. Written in mythological tradition, references are loaded with the importance of the head.  Cuchulain, took the heads of his enemies and hung them from his chariot.  In The Book of Leinster reads: A hag abode in the great house with three heads on her thin neck. and Nine heads from the other side of the iron couch horridly screeched.  And how could I forget my father’s favorite tale, The Headless Horseman’.  The horseman had no power over his victims as he had no head!