The Celts believed water had magical properties, hence the holy wells of Ireland. One  reason  might have to do with how the water got here. Though there are many myths about the beginning of civilization, one theory is that the world was covered in water, flooded so to speak, and when the waters receded, the most holy of it was left behind, perhaps seen as a passage between the earth and the Otherworld. The most holy and the largest of the waters, ( in Ireland at least)  the River Boyne and the River Shannon. The water of holy wells was also seen as a  regenerative life-force, perhaps to grow back severed limbs, make a woman conceive or give great wisdom when drunk or bathed in it. . During Pagan times, carved totems, jewelry, weapons and cauldrons were dropped into wells, lochs, and rivers as votive offerings to the deities. 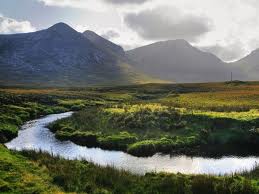 Holy or sacred wells actually predate Christianity, even though many of them are named for Christian saints. In Walter and Mary Brenneman’s book ‘Crossing the Circle at the Holy Wells of Ireland, ( a fabulous reference with lots of photos)  they list sixty three holy wells, although another source claims there are as many as three thousand all over Europe. Many date back as far as prehistoric times. They attract both natives and tourists alike though you won’t find their locations in most travel books but you might find a friend or two at the nearby pub to point the way..

Tales of the Fenian Cycle  One of the main bodies of Irish literature called The Fenian Cycle tells of Finn ma Cumaill who gained wisdom from the Otherworld by drinking water from the Well of Segais. In the story Finn and two friends find a magical mound with the door ajar and try to go in. The three daughters of Bec mac Buain who is lord of the mound try to slam the door shut on Finn but water from a pitcher she is carrying spills on Finn’s lips.  Finn catches his thumb in the door. He puts his thumb in his mouth to numb the pain and swallows some of the sacred water, giving him wisdom. Another story concerning Finn tells of Finn and his teacher, Finn Eces. The teacher tells his pupil to catch the magic salmon who lives in the pool of Linn Feic and cook it. Fin does catch the salmon but burns his thumb in the cooking of the salmon. Naturally he puts his thumb in his mouth again and becomes the smartest man alive!

An Irishman intoxicated? Why, its the water of life!   The myth of Niall and his four brothers illustrates another aspect of intoxication and the water of life. Niall and his brothers obtain weapons to go hunting. One of the brothers, Fergus is sent to get water from a spring. He meets a black hag who demands a kiss, which he refuses. Each brother in turn refuse to kiss the hag except for Niall who closes his eyes and plants a big wet one on the her hideous face. When he opens his eyes he sees the most beautiful woman in the world.  She gives him “the drink” and he becomes king. The water in the tale is compared to strong drink therefore intoxication is thought to be magical.   Not all the Holy Wells are Christian In the Burren, County Clare there is what is called a cleft well on a high ridge overlooking the sea. They call this the tooth well and no local saint is associated with it. The well is no more than six inches in diameter, a round hole in solid limestone. Beside it is a small stone-alter containing offerings of teeth and bone fragments.  Surrounding the well are two  circles carved into the stone, evidence of its Celtic heritage.

Wells to make one pregnant? In Ballyshannon, County Donegal, there is a sea well dedicated to St. Patrick.  It’s located on the shore of the River Erne just before Donegal Bay and is shaped like a keyhole, supposedly resembling a vagina.Near the well is a thorn bush covered with clooties, rags tied to a tree or bush as offerings. Surrounding the well are fourteen white metal crosses.  At high tide the sea covers the well, covering it in fertilizing water. The fresh and salt water combined symbolize the Great God and the Goddess, the union of all beings. Women leave “serpent eggs” beside the well in the hopes of becoming pregnant.

There are many more stories to illustrate the power of the holy or sacred wells of Ireland but these are some of the less known ones. If  you know of any others or have photos you’ve taken please  leave me a comment or better yet subscribe to this blog. Posts on Irish and American history and the like come out one to two times a month.  You can unsubscribe at any time.