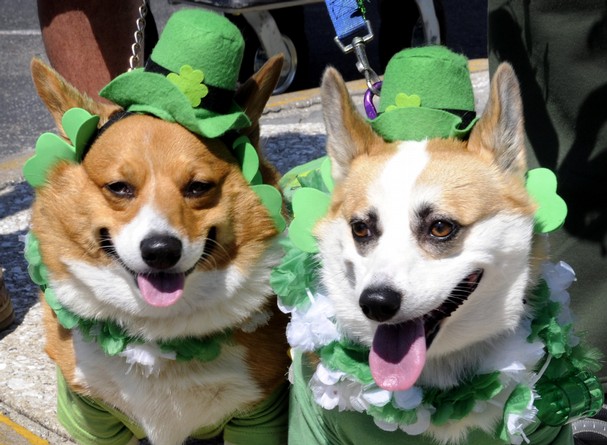 St. Patrick’s Day here in the United States is a big deal. It’s a time of celebration, drinking, flamboyant costumes, Irish Parades, and lost of cash for Irish Pubs as well as anything else near a parade route. When I was a kid we would sit on a cement wall of the nearby cemetery, wrapped in woolen blankets with a cooler filled with girl-scout cookies and drinks. My father worked on the parade committee, which he was very proud to tell everyone within earshot. He made us corned beef and cabbage and a few weeks before something called ‘mutton pies’. Apparently ‘mutton pies’ are a secret recipe because when my sister became an adult it took her years to find someone who would share said recipe.

My name is Brighid O’Sullivan and I grew up in Holyoke Massachusetts, the product of Irish and Polish grandparents. Lots of Irish flocked to Holyoke in the early 1900s to work in paper-mills. Before the paper-mills were operating, Irish immigrants  built the canal in Holyoke.

It has taken me over forty years to truly appreciate the stories my father told me about Ireland and also the sacrifices my grandparents made to give their children and grandchildren a better life when they came to the United States..These things I learned, not from my father but by reading and writing about Irish history What my father was good at, like most Irishmen, was telling a good story.  His favorite lesson was to tell us we had leprechauns that looked out for us, sort of like guardian angels. Now, I’m thinking that’s more of an American interpretation than an Irish one. From what I’ve read, leprechauns are not “warm and fuzzy” little men who go around blessing people and giving out magic beans..

My friend Jill told me a wonderful story about the leprechauns that visit her house every year. The little devils are planning their torturous tricks and chaos as I write this! This is what happened last year. The night before St. Patrick’s Day there was a terrible clatter and rumbling in the lower part of the house but only Molly who is eight, heard the commotion. She was too frightened to get out of bed. In the morning Jill, her husband, Bill, Molly, and six year old Liam saw that their living room as well as the kitchen and dining room had been completely “trashed.”  Furniture was tipped over, Mardi-Gras beads (who knows how the little buggers got a hold of those!) hung from chandeliers, trash was everywhere from tipped over bins and the cupboards were all mixed up.  Molly was mortified! How had they got into her house this time? Then she saw the trap she set, a very elaborate James Bond kind of trap, thrown across the room as if preceding a miraculous escape. The buggers had actually chewed through the solid wooden box! and in record time. They’d even had time enough to tamper with Bill’s special waffle batter in the refrigerator, which now had turned green!   Over the years, Molly and Liam asked lots of questions. “Why don’t they torture my friend’s houses? How do they know where we live? Why do they only come near St. Patrick’s day”  Jill’s responses were quick. The leprechauns only visit the houses of children with Irish roots. They know where they live because every year the family visits Ireland for two weeks and then the leprechauns follow them home to America. It takes them all year because they have to trash all the homes in Ireland first.
Now my dad would have loved this story. I wish he had thought of all this  Tom Foolery himself.