How the Irish Boy Scouts Foreshadowed the IRA | Most Fun History Facts of Ireland
12745
post-template-default,single,single-post,postid-12745,single-format-standard,strata-core-1.0.5,strata-theme-ver-3.1,ajax_fade,page_not_loaded,mac,wpb-js-composer js-comp-ver-6.0.3,vc_responsive

How the Irish Boy Scouts Foreshadowed the IRA

Na Fianna Eireann was founded in 1909 by Constance Markievicz.  When she first began the organization it was with the purpose of teaching the boys basic survival techniques, Ireland’s history and a sense of national pride, something that she felt had been missing for way too long in the schools of Ireland. Since the beginning of Colonization, only British  history was taught and everything Irish suppressed. Not only  history but  Irish music,  native sports,  Irish dress, and worst of all the Irish tongue. At the time of the Fianna a great wave of nationalism was in the air. Fostering the native language was at the top of the Gaelic League’s list. Some thought this could be accomplished while still remaining in the United Kingdom but others like Constance Markievicz, Patrick Pearse, James Connolly and others became increasingly convinced that breaking away from England was the only way to save Ireland. The Fianna would be a key players in that dream. A dream that had nothing to do with playing soldier for they were in fact real soldiers.  In the words of Constance Markievicz It will take the best and the noblest of Ireland’s children to win Freedom. 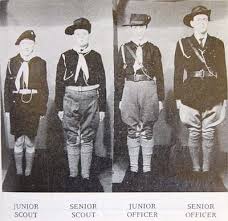 Under the discipline of their own peers, the Fianna members grew from boys to men, learning everything from camp-life and knot tying to signalling, marching in formation, and how to use a  rife properly.  They formed pipe bands and hurling teams all over the country. They also learned basic first-aid.

In 1913,the Fianna  trained the newly formed military group, the Irish Volunteers. At this time in Europe, Ireland was one of the most poverty stricken countries in all of Europe. The infant mortality rate soared, and many Dublin Irish lived in one room run-down tenements.  Wages were low; employment conditions unfair, and when the Irish formed  the Irish Transport and General Workers Union, Dublin businesses locked out their employees.  People were barely living on their wages as it was. Now they were starving. The Fianna and others set up a Soup Kitchen in Liberty Hall and fed soup and sandwiches to over 3000 people a day.

In 1914, Fianna soldiers marched with the older Irish Volunteers from Dublin, bringing with them bicycles and a trek cart  to intercept German guns being smuggled in the Howth Harbor on the ship, Asgard. When the British realized what was going on a great collision began between volunteers and the British. The guns were hidden in the Scout’s cart and whisked away under British noses.  According to an unknown eye witness The Scouts were even pluckier than the volunteers. every one of them held onto his rifle as he would hold his own life. 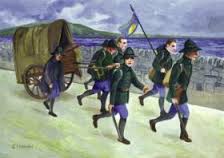 By 1916 the country was in open rebellion against the British, beginning with the taking over of the General Post Office in Dublin and declaring Ireland a Republic. The Fianna soldiers were in the thick of the fighting. This is what they trained for. With the quickness of youth, they cycled from one point to another, passing dispatches or signals by  means of a heliograph or fighting and some lost their lives. By 1919 Ireland was in a Civil War and the Fianna were older. Some had already joined the Irish Volunteers or the  Irish Republican Brotherhood. This later became known as  the IRA.

In 1909 Constance decided to make a commune for her Fianna boys North of the city in Belcamp Park. She felt it would get them away from the unhealthy atmosphere of city life, they would learn about farming and continue their military training. Lots of hungry scouts arrived but it was not a great success.   The commune was to be run by Constance, Bulmer Hobson and Helena Molony but Hobson thought it women’s work and was never around. . Rumors spread that Hobson was sharing his bed with both women and people refused to do business with them.  The large rooms were difficult to heat,  food was not delivered as ordered, the garden only produced weeds, and soon they ran out of money. The house also appeared to be haunted and food disappeared. When Casimir, Constance husband,  returned  from the Ukraine, he first made appearances at his favorite pubs where he was told that his wife had moved and how.

Casmir Markievicz was the husband of Constance and was actually away in Poland when his wife was working with her scouts. His biography is interesting. In The Polish Irishman by Patrick Quigley, Casimir relates in his Polish theatrical way, the story of how he returned to his new home, “I have great trouble to find this house in the dark. Finally I find it and I  knock and I knock but not a sound. I go around the back and I call out ‘Constance! After a while a window goes up and a dirty little ragamuffin puts out his head and say, ‘Who da?..’I say I am Count Markievicz and I want to see Constance Markievicz.” I hear much scuffling and running and a voice saying ‘there is some big fella out there who says he is your husband, at last the door open. In 1924 Casimir wrote a series of essays in the Polish Press entitled Letters from Ireland. He called the boys ‘Sprouts’ for they popped up everywhere, under beds, under chairs and, out of cupboards consuming all the rashers and eggs, smoking his tobacco and drinking his whiskey. One night he stayed up late to confront the ghost to find the maid had been keeping an unofficial boarder, a milkman who was also an army deserter.