The Roots of Irish America Part I 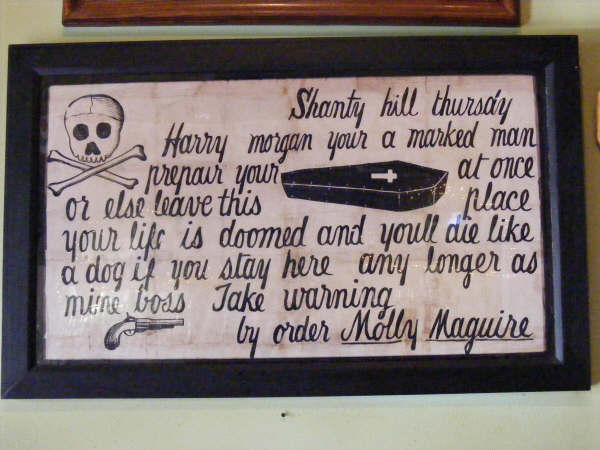 The Molly Maguires were a secret society started in Ireland in the 19th century. Originally known as the Ribbon Society before its expansion outside of West Munster and Northern Connacht, they conducted their meetings in  lodges across Ireland. The champions of the poor, they sent threatening letters, boycotted, or used violence against wealthy landowners who were charging ridiculous prices for rent and anyone accused of acquiring land where starving peasants were evicted.

An  Irish mafia in America.

A movie about the Molly Maguires came out in 1970 starting Sean Connnery, Richard Harris, and Samantha Eggar. The movie takes place in Pennsylvania however depicting coal miners struggles  against oppression and corrupt mine owners.

Leaving Ireland for America, the Mollys (or Ribbonmen)  settled in Pennsylvania, learning the trade of a coal miner. They also blended with two similar Irish societies, the Hibernian Benevolent Society and St. Patrick’s boys in Pottsville, Pennsylvania. These legal organizations sought to affect change in working conditions for coal miners. From here, the Molly Maguires enrolled in politics, bought businesses and nearly every Irish tavern or saloon was a devoted member of the Molly Maguires or more commonly known as the Hibernians or St Patrick’s boys. It was the first unionized group of Coal Miners and strictly Irish.

Eagerly, the Irish had flocked to American shores for the promise of a job in industry.  Most were farmers and  unskilled but willing to learn a trade.

It was a hard life.

They worked long days and many hours in the dark,

Breathing coal dust into their lungs

Just so their families could get ahead.

They were not the only immigrants doing so but the only Irish group in Pennsylvania working towards unionizing workers. Many of the men did not  know English.

At the end of the 19th century and into the 20th, the people of industrial America experienced dropping wages, layoffs, and recession.

Although people in the mines worked long and hard, wages decreased instead of increasing.

Coal miners formed their own union, one of the first of its kind in America.

In addition to working underground and not seeing the light of day for days on end, the miners had to endure horrendous conditions.

Floods, mine explosions and the ever-present danger of being buried alive gave many families good cause to worry. Things were rough and conditions were not improving despite miners discontent. Repercussions against the Coal Kings, specifically murder were blamed on the Molly Maguires.

Their troubles escalated from the 1850s to the 1870s. On June 21st, 1877 four Irishmen were hung for murder. They were Jack Donahue, Edward Kelly, Mike Doyle, and Alec Campbell.

People packed into the prison yard for viewing and what a show they had because unfortunately, the mechanism malfunctioned and the men were strangled not hung.

In addition, thirty miles away in Pottsville, six more Irishmen, Jim Boyle, Hugh McGeehan, Jim Carroll, Jim Roarty, Tom Munley, and Tom Duffy were hung. Boyle held a red rose as he walked to the gallows. When the trap was sprung the rose fell to the ground.

June 21st 1877 became known as Black Thursday. Twenty men in all were hung ending 2.5 years later, the last one, Charlie Sharpe who only moments before might have had a reprieve.

In 1897 there was a depression in America.

In response to lower profits, coalmine owners dropped wages. To make matters worse , competition by a multitude of minority groups afforded owners the opportunity to take advantage of the situation.

The Coal Kings gave miners credit at the local store as well as housing instead of a paycheck. If they wanted to get rid of a worker they simply cut off his credit and they could do this without any notice at all.

Employers refused to negotiate, believing the unions were the cause of all their troubles in the first place. Strikers were evicted from their homes and their houses given to non-strikers or ‘scabs.’

He established a commission to investigate conditions of the coal mines. No other president had ever intervened in an industrial dispute before. After five months of hearings, coal miners were offered 10% increase in wages, a 10% reduction in hours, and the right to elect their own weighing men. Although corruption of the Coal Kings was finally unveiled, miners did not get all they wanted. Their union was still not recognized.

Some men decided to leave the mines for better opportunity. They traveled west to Arizona, New Mexico, Colorado, Montana to mine for gold, copper and silver. Others joined another trade or worked int the booming oil industry.

The stories of the men executed were sung in Irish ballads.

For a more detailed account of the Molly Maguires go here.