Ireland Away Giveaway and The Troubles | Most Fun History Facts of Ireland
12551
post-template-default,single,single-post,postid-12551,single-format-standard,strata-core-1.0.5,strata-theme-ver-3.1,ajax_fade,page_not_loaded,wpb-js-composer js-comp-ver-6.0.3,vc_responsive

Home / Irish History / Ireland Away Giveaway and The Troubles

Ireland Away Giveaway and The Troubles

The violence of the Troubles in Northern Ireland  cannot be overlooked in Irish history so this post is dedicated to that subject.

In honor of the loyal readers of Celticthoughts.com,. There are over 900 now and the numbers grow consistently day by day, I am running a giveaway in June. I will be in Ireland in July so winners will be announced upon my return.  Gifts range from Irish books set in Ireland, Irish jewelry, gifts and a very special prize from Patrick Taylor, his newest not yet published book called Only Wounded about the Troubles in Belfast by Patrick Taylor. He has graciously agreed to donate an autographed copy of his new book. To be entered into the drawing, simply comment on any post in the month of June or subscribe on the home page to Celticthoughts.com. 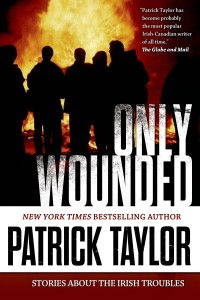 Patrick Taylor is the author of the wildly popular Irish country Doctor series. Remember to comment on this post so you can win

As you know Celticthoughts is not just about a Giveaway but about Irish history so here are a few facts about a time in Irish history known as The Troubles in Northern Ireland.

1. The Troubles in Northern Ireland has a long history of hatred, suspicion, partition, and violence going as far back as the Reformation but escalating after the partition of Ireland when the British government passed the Government of Ireland Act of 1920.  This divided Ireland into 2 countries, the southern half becoming the Free State and the counties of Antrim, Armagh, Down, Fermanagh, Derry, Tyrone, and 2/3 of the Province of Ulster joining the United Kingdom.

Generation after generation became caught up in the Troubles and violence  from an early age. Discrimination against Catholics goes all the way back to the 1600s when Penal Laws were in existence.

2.  Derry saw some of the most violence. In 1972,  a horrific action referred now as Bloody Sunday, also called the Bogside Massacre occurred at the hands of the British government. Twenty six unarmed civilians were shot  during a protest march against internment (imprisonment without trial) Fourteen people died, many of them while fleeing from British soldiers. Others were shot while trying to help the wounded and two were run down by military vehicles.

British troops stand guard in Derry, Northern Ireland, during disorders in the area in 1969. (AP Photo)

3.  Although 2/3 of Northern Ireland is or was Protestant and most of Derry ..  Catholic, this created great tension politically, favoring Unionist land holders in political elections and jobs. The right to vote was restricted to rate payers, favoring Protestants who owned the most land. With land holdings and rents in more than one district often these people were allowed more than one vote. Sometimes 6!

5. One of the most typical campaigns of Irish rebellion was hunger striking. Bombings both in England and Northern Ireland also kept tensions high in both countries.

The above post is but a fraction of a very complex political  as well as personal tragedy especially in Northern Ireland. For a long time the rest of the world saw this as the culture of the north.  Fur further study,  the journalist Tim Pat Coogan has written a book entitled The IRA, which is a  through text on the subject.

Don’t forget to either subscribe or comment here for a chance on Patrick Taylor’s new book as well as other prizes in June.