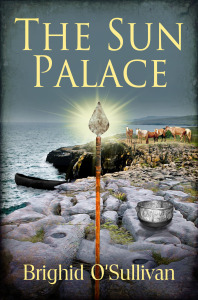 The Sun Palace is a book set in sixth century Ireland rich in Irish history. http://amzn.to/1PrjOZl and you can order it here. Review copies available FREE. Contact Brighid @celticbrighid@gmail.com

Pagan Druids and Christian monks live side by side. People are highly ‘superstitious.’  A man struggles to hold onto the woman he loves and a young girl travels alone. Miraculously untouched by danger, she yearns to learn the truth about her mother’s death and meet the father she never knew … but Dubthach is the Queen’s brother and threatened by Brigit’s existence; she will do anything to keep the secrets of her own violent past buried.

The Sun Palace is available on Amazon.com for all digital reading. If you are interested in a print copy, email me and once they are available I will let you know.  Multiple excerpts not found on Amazon.com,  can be read Free @ Bublish website.

It is beautifully written by someone passionate about the subject who brings the ancient myths and legends to life through this compelling tale. The plot of the Sun Palace weaves in twists and turns patterned by tribal rivalry and betrayal against a backdrop of ancient rituals, beliefs and customs. The story flows with plenty of action and I was carried along by the many twists and turns. The characters come to life in this enthralling account of a changing world. Highly recommended.By Casey Lee

This is what Richard Sutton had to say…..

The Sun Palace is about family, loyalty and the realities of ancient politics. It’s story told in a distinctively Irish writing voice. The main character is a young woman who has been subject to the tradition of fosterage. She has been raised outside of her blood family’s influence, but certain strong personality traits and an unquenchable thirst for the truth pull her away from her designated family in search of her father, a powerful tribal king. Her learning to live in both worlds — the world of her father’s palace and her village’s simple, traditional life — is a really engaging ride, as are the parallel tales of her foster sister and other family members coming to terms with love and where their own loyalties should lie. I also enjoyed the tenuous presence of a new religious doctrine as Christian Monks spread their word and healing traditions among the pagan Irish. This period of early contact and the clash of philosophy provided the underpinnings of the modern Irish soul. Extremes of joy as well as pain are found in ample doses. Parental guilt and sibling resentments also build to extremes as a sister of the king tries to secure her own fiefdom and consolidate her own power. She has a magical ability to control those that seek her protection, but it is often reflected in evil actions. Ms. O’Sullivan blends all these really engaging, often battling personalities with just enough detail to set the reader right into the action as it swirls and flows. Her re-creation of Ireland’s natural, very distinctive beauty is so well wrought, I felt immersed. If you have any connection with or feeling for Ireland or her hearty, earnest people, I can recommend this book with no reservations.